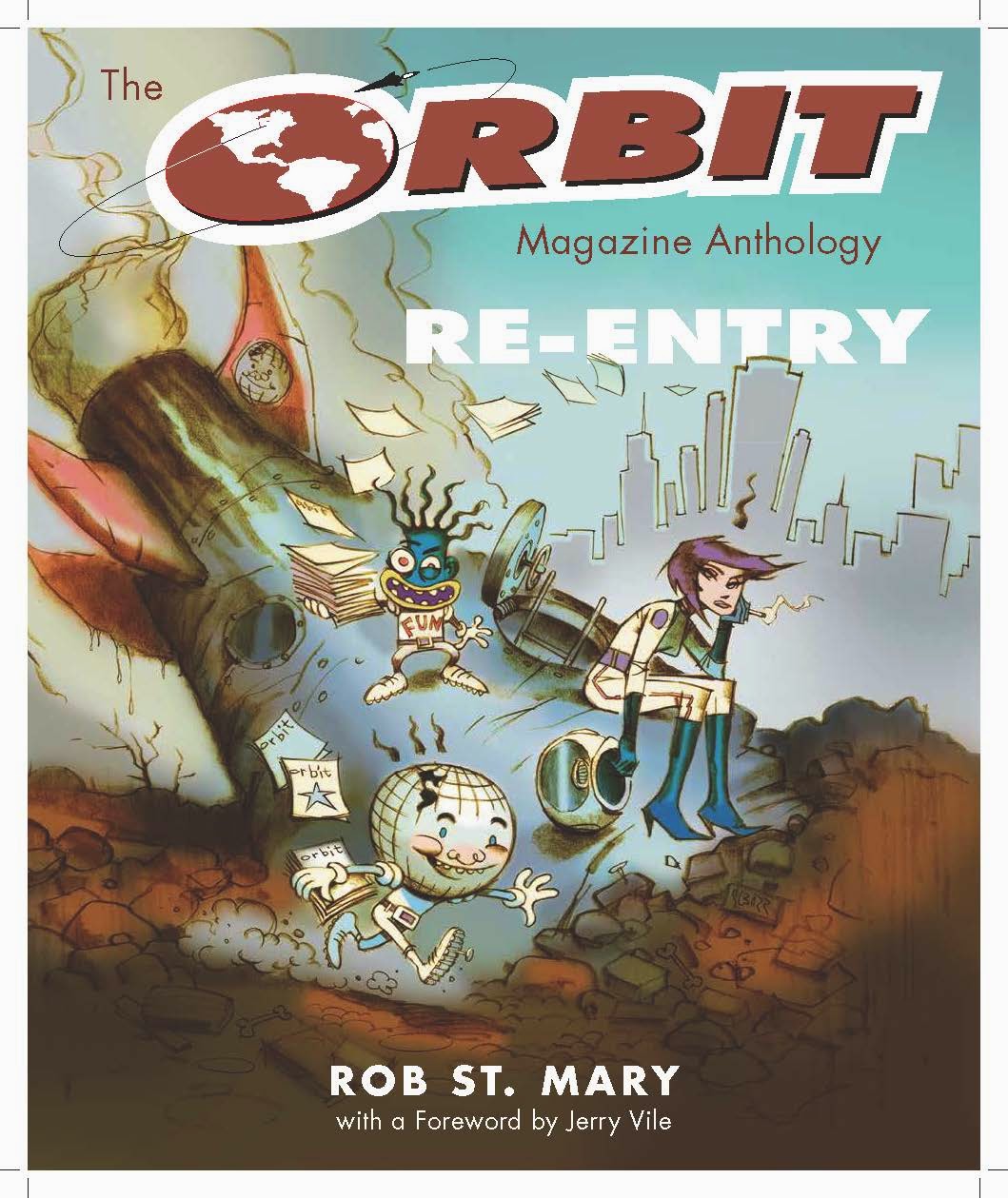 With a mischievous globe-headed mascot that appeared in every issue and even on Quentin Tarantino's T-shirt in Pulp Fiction, Orbit was an instantly recognizable arbiter of 1990s Detroit culture. But its irreverent tone and unique editorial features could be traced to two earlier local publications from creator Jerry Peterson, a.k.a. Jerry Vile—White Noise (1978–1980) and Fun: The Magazine for Swinging Intelectuals [sic] (1986–1990). In The Orbit Magazine Anthology: Re-Entry, author Rob St. Mary details the full run of White Noise, Fun, and Orbit, collecting two decades’ worth of Detroit’s alternative publishing history into an oversized, heavily illustrated volume that situates the publications in the city’s pop culture and media history.

St. Mary shows that while other alternative papers followed a tried-and-true focus on lefty politics and the arts, Vile’s publications found their niche in biting satire and sharp design that fed on popular culture. From the 70s punk scene in White Noise to audacious articles and irreverent "news" in Fun and a blend of reporting, satire, and culture in Orbit, St. Mary shows that Vile’s publications were distinctive in their content and uniquely Detroit in their tone. In sections devoted to each magazine, St. Mary details their recurring features (including dining, movie, and music reviews) and interviews former staffers. Numerous images and page spreads reveal the notable Detroit musicians—like Destroy All Monsters, the Gories, ICP, Jack White, Kid Rock, and Derrick May—and artists—including Niagara, Glenn Barr and Tristan Eaton—that graced their pages.
A foreword by Jerry Vile and an afterword by Ben Blackwell round out this one-of-a-kind volume. Anyone interested in Detroit arts and culture or the history of alternative publishing will be grateful for The Orbit Magazine Anthology: Re-Entry.
Written by: Rob St. Mary
Published by: Wayne State University Press
Date published: 09/01/2015
ISBN: 9780814337318
Available in Paperback

In Podcasting on a Budget (AKA Podcasting on the Cheap) Mike White details the nuts and bolts of creating and distributing a podcast all for less than $60. He also reveals the intricacies of audio editing, getting your podcast on iTunes and utilizing social media for free publicity.

Cinema Detours is a collection of two-hundred twenty movie reviews written over a period of six years and published in a miscellany of media, including: Detour Magazine, Detroit's Metro Times, Mondo Film & Video Guide, Wild Side Cinema, Daily Grindhouse, and more. These reviews have been collected to preserve them in an archival physical form to rescue them from the ephemeral nature of the net.

Films in this collection are mostly off the beaten path, representing genres all over the map: Cult, Horror, Sci-Fi, Film Festival Flicks, Action Films, Superhero Movies and even a Czechoslovakian Musical Western. Get in, strap in, shut up, and hold on as we take a breakneck tour of the lesser traveled reaches of the cinematic landscape. Tighten your seat belt and read carefully because everything happens fast. You've never had a trip like this before.