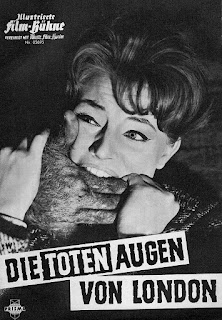 On this special episode, Mike is joined by Prof. Nicholas Schlegel, author of the upcoming German Popular Cinema and The Krimi Phenomenon: Dark Eyes of London from Lexington Books, Rowman's academic imprint and Samm Deighan, author of the upcoming The Legacy of World War II in European Arthouse Cinema from McFarland Books to discuss Krimi films. These were a German subgenre of films based on the works of Edgar Wallace that were popular during the 1960s and paved the way for Italian Giallo films.

We're looking at The Dead Eyes of London and The Creature with the Blue Hand and how they fit in the larger Krimi world.

Listen to "Special Report: Krimi Double Feature" on Spreaker.
Links:
Become a supporter of The Projection Booth
Buy The Dead Eyes of London on DVD
Visit Krimi in the Pocket, Giallo on the Brain