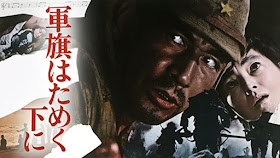 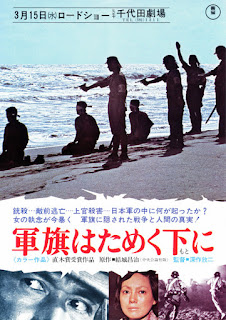 Rob St. Mary returns to The Projection Booth to discuss Kinji Fukasaku's 1972 anti-war film, Under the Flag of the Rising Sun. The film stars Sachiko Hidari as the widow of Sgt. Katsuo Togashi who died in WWII. His death certificate is unclear about how he died and, thus, she can't claim survivor benefits.

The authorities are either unable or, more likely, unwilling to help her so she investigates her husband's death, tracking down his fellow soldiers and unraveling a Rashomon-like story of what might have really happened to him.

Along with Rob, Chris Stachiw joins Mike to talk about Fukasaku's film as well as Clint Eastwood's Flags of Our Fathers / Letters from Iwo Jima double feature. Translator and filmmaker Linda Hoaglund provides insight on Fukasaku's motivations during her interview.

Links:
Become a supporter of The Projection Booth
Buy Under the Flag of the Rising Sun on DVD
Check out Linda's latest film, Edo Avant Garde